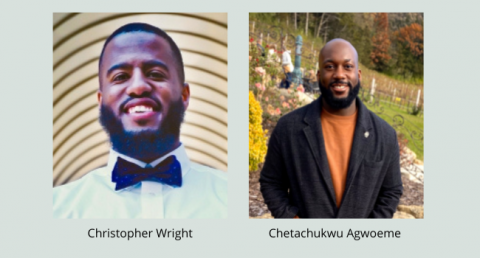 Two doctoral students from the Center for Urban Education at the University of Pittsburgh School of Education were recently invited to present their research on antiBlackness in higher education at the American Educational Research Association (AERA) 2022 annual conference. The event was held from April 22-25 in San Diego, California.

Christopher Wright and Chetachukwu Agwoeme each wrote scholarly papers that analyzed the institutional responses of colleges and universities following the murder of George Floyd in May 2020. At the time, organizations nationwide were issuing position statements and pledging action.

Within this context, Wright and Agwoeme wanted to interrogate the discourse of university leadership to reveal the relationship between words and power structures.

Wright’s paper,  “AntiBlackness in the Ivy League: Investigating Presidential Responses to George Floyd’s Murder,” was co-authored with T. Elon Dancy II, the executive director of CUE, Helen S. Faison Endowed Chair, and co-principal investigator of the PittEd Justice Collective. Their findings noted that many universities did not address Floyd's death as a murder, did not mention the assailants responsible, and were explicit in discouraging what they perceived as "violent" and "destructive" protests. However, virtually all university presidents used the moment to reaffirm their institution’s commitment to diversity and inclusion after these omissions.

“In my research, I find that elite institutions, despite suggesting otherwise, participate in the same antiBlack structures that worked to render George Floyd’s life null and void,” says Wright.

Agwoeme’s paper, “A Siren Song in American Higher Education: An Analysis of University Responses to George Floyd’s Murder,” was co-authored with Keanna Cash (MEd ’21) and Dancy.

They found that presidents of R1 universities engaged in apologia (a rhetoric of defense to avoid apology or culpability) to minimize Floyd’s murder into a death or “senseless killing” and to minimize the associated role of law enforcement in anti-Black terrorism.  In addition, Agwoeme found R1 university leaders did not mention anti-Blackness in their public statements about the murder of Floyd. Their statements used ambiguous language that stopped short of holding law enforcement culpable for Floyd’s death, and used precise language to condemn the destruction of property from uprisings in response to Floyd’s murder.  Without regard to anti-Blackness, apologia works to advance a framework of diversity and inclusion that does not shift power, but maintains the current structure.

“University leaders leaning on diversity and inclusion in the wake of Floyd’s murder shows a misinterpretation of the problem, which is anti-Blackness,” says Agwoeme. “Floyd’s murderers were a diverse group of police officers composed of two white males, one Black male, and one Asian male. However, diversity did not prevent the terrorism inflicted on Floyd’s body by Minneapolis law enforcement.”

The research experience was a highlight for Wright and Agwoeme, who are earning their PhDs in Urban Education from Pitt Education.

Their research was conducted as part of the Higher Education and Racism (H.E.A.R.) initiative of the school’s PittEd Justice Collective.

Led by Dancy and Professor Juan Battle from the City University of New York, the H.E.A.R. initiative provides graduate students with the opportunity to produce scholarly research that investigates antiracism in colleges and universities.

"This is one outstanding example of how the PittEd Justice Collective has mobilized students across Pitt's campus in response to its aims,” says Dancy. “I'm so proud of our students' work here and excited for their papers to inform the knowledge base about justice and freedom in education research and praxis.”

In addition to the H.E.A.R. papers, Wright and Agwoeme contributed additional research to the AERA 2022 conference. They had another paper accepted in conjunction with Dancy, Kirsten Edwards (Florida International University), Keon McGuire (Arizona State University), and Jazzkia Jones (MED ’21) of Georgia Southern University. The team presented emerging findings from a systematic exploration of the usage of the term antiBlackness in education research and scholarship.

The Center for Urban Education transforms educational opportunities through research, teaching, and service.