When Richard D. Benson II was earning his PhD in education policy from the University of Illinois Urbana-Champaign, he thought deeply about his identity as a scholar.

“I never felt the need to compartmentalize my love for Black studies, Black Radical Tradition, history, and education,” says Benson. “All of these practices and critical understandings of Black knowledge spaces are on a continuum of a greater tradition, versus being separate strings of thought. However, history emerged as a particular discipline that was the most prominent in my approach to understanding ways of knowing.”

Now, as the new associate director of the University of Pittsburgh Center of Urban Education (CUE), Benson is spearheading collaborations and partnerships that will positively transform urban education in all its forms.

“I felt this position spoke directly to my output as a scholar in addition to what I envision with respect to assisting young people who want to gain critical insight and want to make greater contributions to the field of education,” says Benson, who also serves as an associate professor in the School of Education’s Department of Educational Foundations, Organizations, and Policy.

Prior to Pitt, Benson was an Associate Professor in the Education Department at Spelman College in Atlanta. As a historian of education, he specializes in the Black Freedom Movement, the Black Radical Tradition, and transnational social movements.

Since starting his role at CUE in September 2022, Benson has hit the ground running by forming new relationships between CUE and the local community.

“One of the major things I want to do is expand and develop relationships between community and classroom spaces, especially for those who are part of Black professional classes, teachers, community organizers, and union workers,” he says.

He also wants to expand the relationships and pipelines among Historically Black Colleges and Universities, Minority-Serving Institutions, and CUE.

“Those relationships could help recruit future scholars who may see themselves as historians, sociologists, and critical theorists in the space of education,” says Benson. “I hope to be part of a recruiting campaign to identify the young scholars who want to do more enhanced and innovative work as it relates to how urban education situates itself contemporarily.” 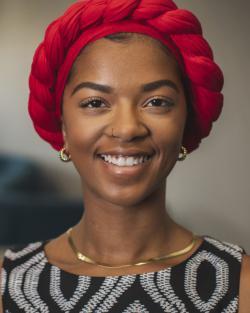 Hopkins is program director for Practices of Freedom: A Model for Transformative Teaching and Teacher Education. This program centers Black history, Black scholarship, and the voices and experiences of Black students and educators, with the goal of transforming education structure in western Pennsylvania.

Since starting in June 2022, Hopkins has recruited for the program’s intergenerational micro-collectives, which include high school students, college students, in-service K-12 classroom teachers, and experienced community educators. Together, these participants engage in deep learning and reflection through study groups, equity conversations, Freedom Seminars, and more.

Hopkins is also working to build connections with groups that share a common goal of increasing the number of Black teachers in the region.

“There’s a lot of opportunity to loop people in and form a community,” says Hopkins. “We can bring people into these critical conversations and expose them to perspectives from high school students all the way up to retired Black teachers. That type of intergenerational learning is really key.” 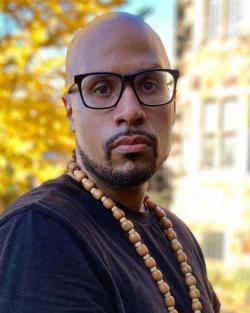 Speamer became the CUE community fellow with Homewood Children’s Village in March 2022. He works with the nonprofit to provide educational services and learning support for youth and their families in Homewood.

The first project he worked on was Learn and Earn, a summer youth employment initiative. Speamer coordinated with parents and organizations across Pittsburgh’s East End to ensure meaningful experiences for students.

“The kids loved it, working a job and learning something they’re interested in,” Speamer said of the Learn and Earn program. “I think the parents would agree that it was a great experience.”

Now he is initiating a pilot of the Village Learning Hub, which will provide an equitable support system for families who are homeschooling.

Speamer says working with youth is what drives him in his work to improve urban education.

“Kids have that light within them, and I think we should nurture and support that,” he says. “If we can do that the right way, generationally speaking, we can make the world a better place.”

The Center for Urban Education transforms educational opportunities through research, teaching, and service.